‘Meeting of the Waters’ Along the Amazon River

This morning we reluctantly had to say goodbye to the Amazon. After breakfast, we checked out of the hotel. We said goodbye to Alan and gave him his tip. He remarked earlier in the trip that he liked my lightweight and water resistant Columbia white long shirt, and said such gear was hard to find out here. I decided to give him the shirt off my back, but told him he needed to wash it. He appreciated it. If you ever visit Ariau and see Alan wearing a long-sleeve white shirt, tell him and my shirt I said goodbye.

Last morning waking up in our Amazon village

Afterwards, we caught our ferryboat with our group back to Manaus. It was sad to say goodbye to the most unique resort I have ever seen and the magnificent Amazon. However, we had to remind ourselves if this were our only trip to the Amazon, we were lucky to come this one trip.

When we arrived in Manaus around 10 a.m., we exited the boat and said goodbye to our German and Brazilian friends. We also received an Amazonian certificate acknowledge we had experienced the Amazon at Ariau. Along with the Olenbush’s, we arranged a tour to see the Encontro das Águas (“Meeting of the Waters”), one of the wonders of the Brazilian Amazon. A transfer took us to another port where we would depart in a small-motorized canoe with a canopy. I wasn’t quite sure our boat’s puny motor would get us out there!

The Meeting of the Waters is a natural phenomenon that is caused when the dark waters of the Rio Negro and clay waters of Rio Solimoes meet for about 5 miles before forming the Amazon River. It is a truly bizarre performance by the water. Without mixing for about 3.5 miles, the black waters of the Rio Negro run side by side with the salty, muddy brown waters of the Rio Solimoes. This phenomenon is caused by the great difference between the water temperatures, acidity, and current speeds. The Negro River flows approximately 1.2 mph at 82 °F, while the Solimões River flows 2.5 to 3.7 mph and is much cooler at 72 °F. It is truly a remarkable sight to see. Off in the distance you could just barely see them starting to mix. 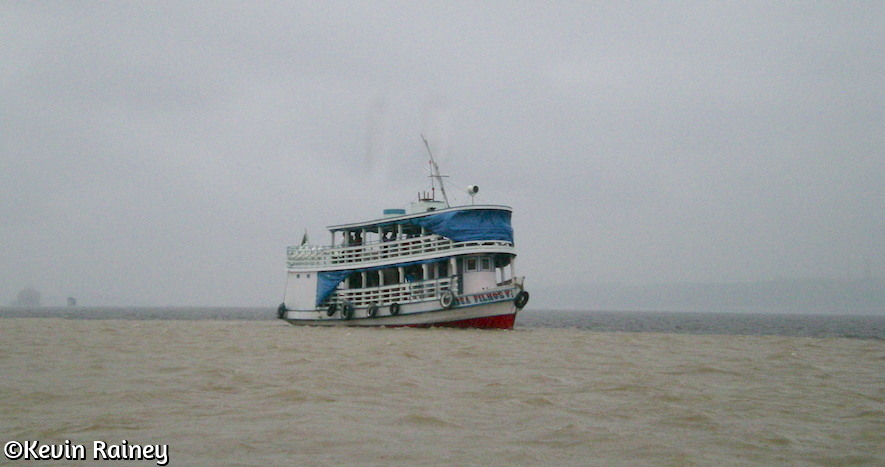 ‘Meeting of the Waters’

It finally hit me that we were on the Amazon River, the world’s grandest river. The river flows more than 4,000 miles from the top of the Peruvian Andes all the way to the Atlantic Ocean. The Amazon is by the far the largest in the world by volume. I read that it could hold as much as all of the next 10 largest rivers in the world combined. Remarkably it empties 8 trillion gallons of water into the ocean every day. Someone told me it holds about 20 percent of all of the fresh water on earth.

As a storm started to roll in, we headed back to port. Our driver took us by the fish market to see the market with the largest variety on earth. We saw fish and sea life I have never seen before. In fact, every year, many fishermen bring in new species of fish that have never been seen before. Scientists record new species at the market sometimes!

We drove by the famous Teatro Amazonas (Manaus Opera House), the only one in the Amazon, and considered one of the most beautiful in South America. Then we headed towards the airport. We said goodbye to Roger and Elizabeth and wished them a safe trip back to the New York. We then checked in on our TAM flight to São Paulo leaving at 3 p.m.

Brazil is a huge a country, and the flight back from Manaus to São Paulo’s Guarulhos International Airport is a long journey. However, TAM is an excellent airline and their service and food is much better than their partner, American Airlines. We said goodbye to the Amazon in good company and service.

After arriving at in São Paulo around 9 p.m., we had a bit of a layover before our next flight left at 11:55 p.m. for Foz do Iguaçu (Iguazu Falls). We wouldn’t arrive until early the next morning.