During the morning, we woke up over West Africa as we passed over Angola, the corner of Namibia and Botswana as we approached northern South Africa. Soon afterwards we arrived at OR Tambo International Airport in Johannesburg. 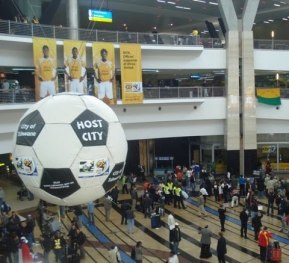 Upon arrival at customs in Joburg, Jeff and I picked up our bags and went to the ATM to withdraw some South African Rand. We couldn’t believe how nice the airport was. The airport had recently been significantly upgraded as the city hosted the World Cup only last month. In fact, a huge soccer ball and other futbol signs still hung in the dome of the main terminal. A new light rail line, called the Gauteng, linked the airport with Joburg’s financial district.

Later as we left the terminal, we were haggled by a couple of con men that wanted to carry our bags. Jeff never gets angry, but these guys really ticked us off. They walked with us outside the terminal near the Intercontinental Hotel to the transfer bus station and asked to carry our bags. We both told them we didn’t need any help, but they accompanied us anyway. They hung around as we waited on our hotel bus (which ran every 20 minutes), and we tried to just ignore them.

When the bus arrived, they tried to grab Jeff’s bag to receive a tip for loading it on the bus. Jeff actually pushed the guy back and wagged his finger in front of the guys face shouting “NO, do NOT touch my bag.” The guy begged for a tip and Jeff told me to get in the van and we ignored them. Wow, I had never seen Jeff that assertive before! Even the bus driver was taken back by how aggressive those guys were. 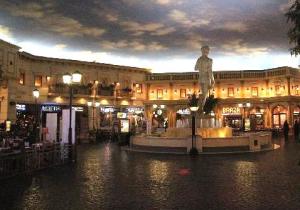 Insidie the casino of the Emperor’s Club Metcourt Peermont

Soon afterwards, we were on our way to a local casino, the Emperor’s Club Metcourt Peermont, where we would crash for the night. We checked in before we walked through the casino. They had a Caesar’s Palace-like mall with beautiful sky-colored murals and tons of shops and indoor fountains. We decided to eat supper at Nandos, a national chicken chain like Chick-fil-A. Then we walked back through the casino, played a few slots and went to bed at 21:15 p.m.