As college football and University of Alabama fans, it didn’t get any better than today. We were Alabama fans going to the national championship game in Pasadena where Alabama’s championship tradition began. Alabama ruled the Rose Bowl in the past and it’s even part of the “Yea Alabama” fight song, but the Crimson Tide hadn’t played in a Rose Bowl game since 1946. We had planned on being there for this historic return, but United Airlines caused us to miss our connecting flight at Chicago O’Hare the night before the game. Our biggest hope was getting out of the Windy City before the blizzard rolled in this morning. 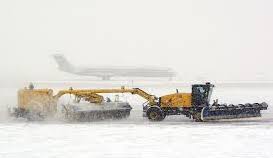 After not sleeping much, Dad and I woke up at 3:30 a.m. and grabbed the shuttle outside the Crown Plaza at O’Hare. Dad and I waited outside with some other ‘Bama fans in the bitterly cold weather. We were not dressed for these very cold temperatures … afterall, we thought we would be in sunny California! The snow was coming down and there were already several inches on the ground. On the shuttle we spoke with several other Alabama fans who were stranded in Chicago overnight by the previous evening’s snowstorm. We also learned a little secret from one of them who worked in Alabama’s Athletic Department. Apparently Alabama quarterback Greg McElroy had cracked some ribs during the SEC Championship Game against Florida. We hoped it wouldn’t impact his performance tonight.

Honestly, Dad and I were not optimistic but we had given it our best shot. When we arrived at the airport, we were relieved to see on the status board that our flight was listed as on time while many others were cancelled! We were elated about our good fortune and we passed through security and then boarded our 6 a.m. flight to San Francisco. It wasn’t Los Angeles, but at least we were on our way to California. We would have to figure out later how to get to the City of Angels.

I have never seen such a mess with people clowning around boarding and slowly storing their items. Dad and I sat across the opposite aisles of the three row plane and I watched him growing anxious. The flight attendants came on the intercom twice imploring passengers to hurry up and take their seats. The last time, a flight attendant said the flight would be cancelled if passengers didn’t hurry up because we would lose our deicing slot. I saw Dad shaking his head and he looked like he was about to stand up and tell people to quit dragging ass around. Eventually, we were ready and pulled into position for deicing. It seemed to take forever, but finally we were in formation to leave. The snow was pouring down as turned on to the runaway. As we took off, I could read Dad’s lips saying hallelujah as we were on our way to California!

When we arrived in San Francisco, we noticed how foggy it was – more so than normal. But the Golden Gate had never looked so welcoming. We quickly de-boarded and headed to our standby flight to LAX. We were a pretty good way down the standby list and the gate agents told us they didn’t think we would make the flight. That is when my masterful negotiating Dad, told them our terrible ordeal, and that we had so much riding on the flight: a once-in-a lifetime game. When we approached boarding time not very long afterwards, the agent called us on the intercom. We had made the flight! Dad and I gave each other a big high five and we were on our way to Orange County. We saw several other Bama fans that didn’t make it. To us, that was heartbreaking.

As we arrived at Orange County, we were ecstatic. Bama and Texas fans filled the airport in their team colors shouting Roll Tide and Hook ‘Em. We picked up our rental car and didn’t have time to go to the airport. Because LA traffic is terrible, thankfully I had planned ahead and looked for mass transit options. I found a Blue Dash express bus in Long Beach, not too far from Orange County Airport, that would take us directly to Union Station. 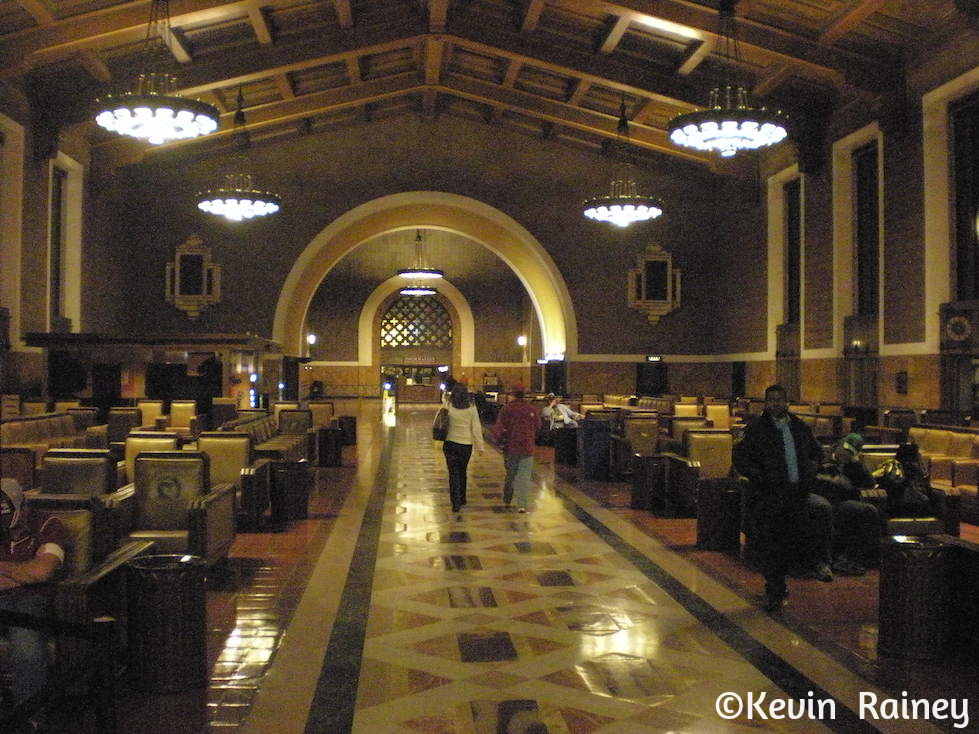 While waiting for our train at Union Station that would take us to Pasadena, we admired the beautiful and classic lobby. This was where Bama players arrived back in the 1920s when Wallace Wade brought the first Tide teams to Pasadena and the Rose Bowl. Then we boarded the Metro Gold Line. It was picture-postcard weather in Southern California, under a blue sky and at the front of the San Gabriel Mountains. The train workers even told us, Roll Tide. 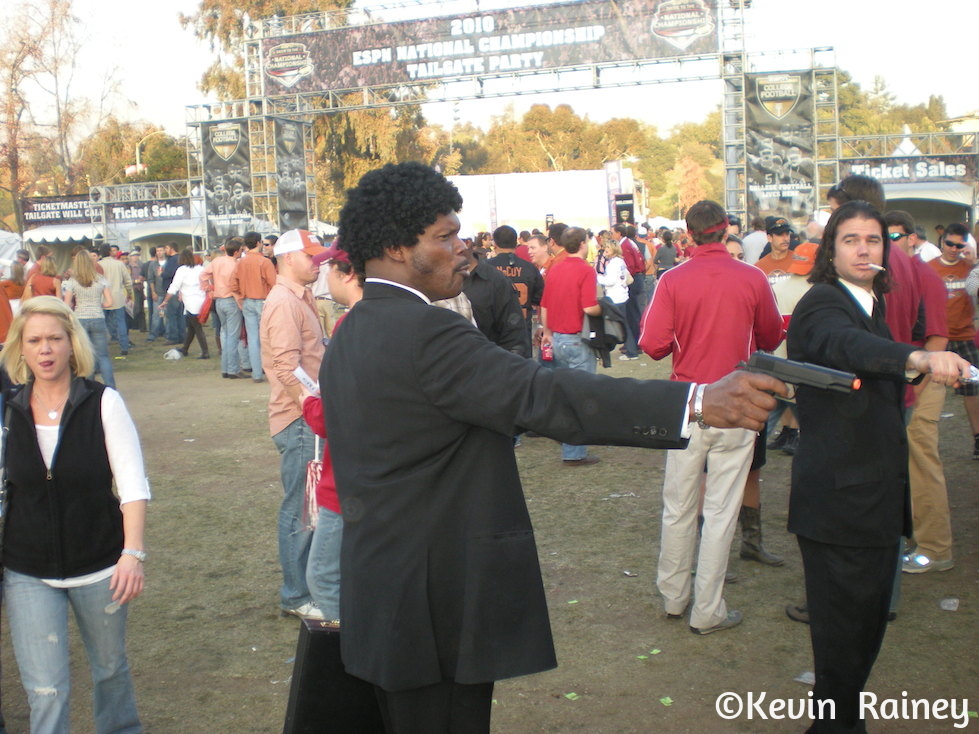 A little Pulp Fiction going on outside the Rose Bowl with Samuel L. Jackson and John Travolta lookalikes

After exiting at the Memorial Park station, we walked three blocks west on Holly Street to a free Rose Bowl shuttle to the Rose Bowl. We passed the beautiful Pasadena Museum of Art and before we knew it, we had arrived at the Rose Bowl. It was honestly one of the prettiest stadiums I had ever seen with the palm trees. Were less than 1 hour and 20 minutes before kickoff, so we didn’t have too long to walk around outside the stadium. We had missed the ESPN tailgate that I had bought tickets to attend, but we didn’t care because we had made it! We took a few photos in front of the famous façade and palm trees.

After walking around the stadium, Dad and I lined up to enter the tunnels. It took a while to enter, but I cannot describe how extraordinary it was entering the stadium. We were in the west end zone and sitting mostly with Alabama fans. We heard more than a few say “I cannot believe were at the Rose Bowl.” SEC teams had been basically excluded from the Rose Bowl since the 1940s when the bowl started to match up PAC-10 and BIG-10 teams. This was an incredible match up because it could only happen for the BCS National Championship. Alabama had a stellar record at the Rose Bowl, where they had established their tradition as a football power and the first from the South in the early 1900s. It’s immortalized in the “Yea Alabama” fight song with the words “Remember the Rose Bowl will win then” and “Dixie’s football pride.”

This game was the ninth meeting between Texas and Alabama, but Texas led the series with a 7–0–1 record. We liked our chances of breaking the streak in the title game. Texas fans felt confident they could repeat their last championship they won here in 2005 when they defeated the hometown USC Spartans in one of the all time great games. 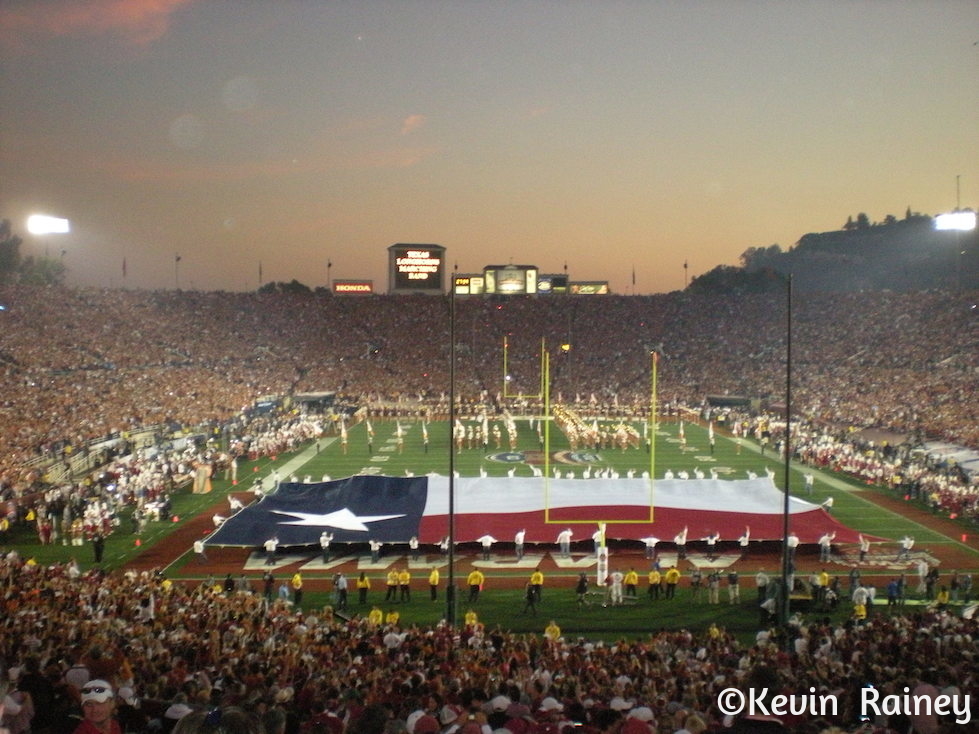 As the sun began to set on the San Gabriel Mountains, the Texas band performed and they were great displaying a huge Lonestar flag on the field. Bevo even made the journey. Then Alabama’s Million Dollar Band took the field and all the Tide fans sang “Yea Alabama.” It was a spine tingling moment, the first of many. Then some skydivers dropped in with University of Texas, University of Alabama and the American flags. Afterwards, Josh Groban sang an interesting version of the national anthem accompanied by Flea of the Red Hot Chili Peppers on the bass guitar. Then several F-18s made a perfect pass at the end of the anthem as fireworks went off. 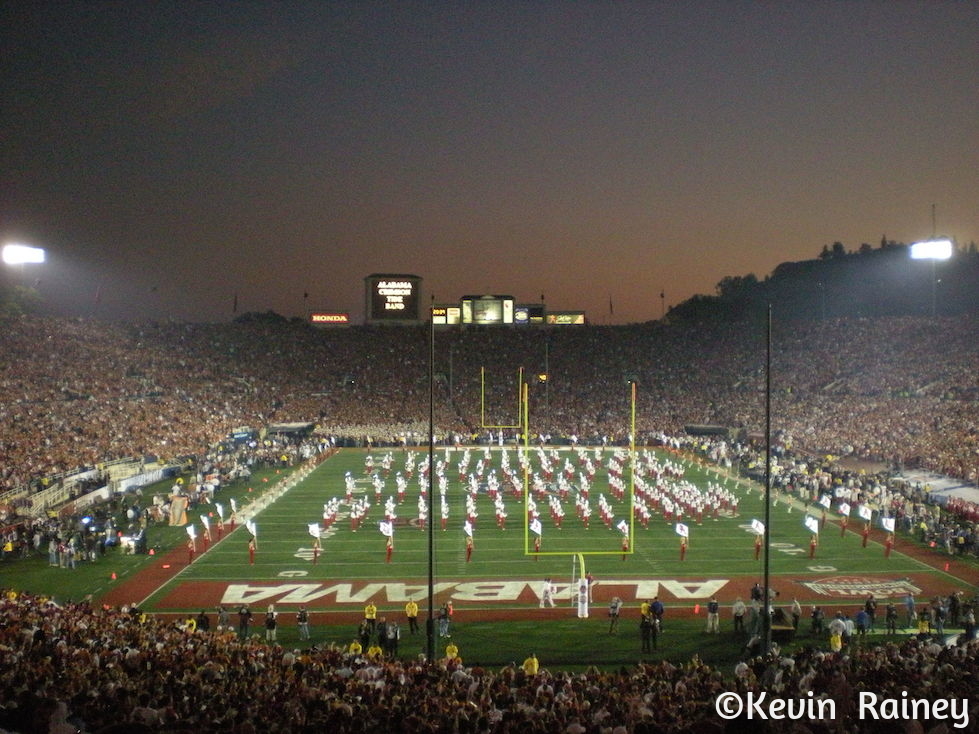 At the coin toss, broadcast legend Keith Jackson flipped the coin. Whenever he called national championship games in the past, Alabama won. We liked the feel of this, and then we won the toss and elected to receive. As the fans chanted, “Roll Tide Roll,” the national championship was finally underway.

Texas wore its white jerseys while its fans sat on the east sideline. Alabama wore crimson jerseys with fans occupying the west stands. 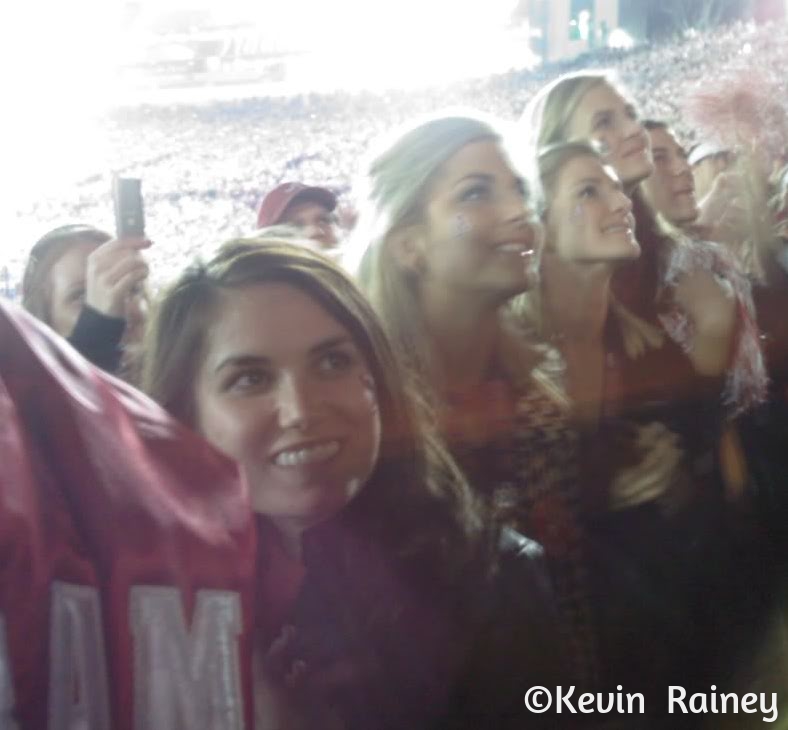 On the first drive, Alabama could not earn a first down and our quarterback Greg McElroy was sacked for a loss. We then attempted a fake punt pass to Dre Kirkpatrick, but the pass was intercepted. Texas then passed and rushed on several plays before kicking a field goal.

However, a bigger play happened on this drive that would alter the game. Texas may have won this one battle, but lost the war. Alabama defensive lineman Marcell Dareus knocked Texas ace quarterback Colt McCoy out of the game during a bootleg on the Longhorns’ fifth play from scrimmage. McCoy wouldn’t return and true freshman backup Garrett Gilbert would struggle in the first half.

With McCoy out of the game, Alabama attacked Texas from both sides of the ball. While Gilbert was able to lead Texas to a field goal on his first drive and another on his second drive (after a recovered short kick-off), Texas did not score any more points in the first half. 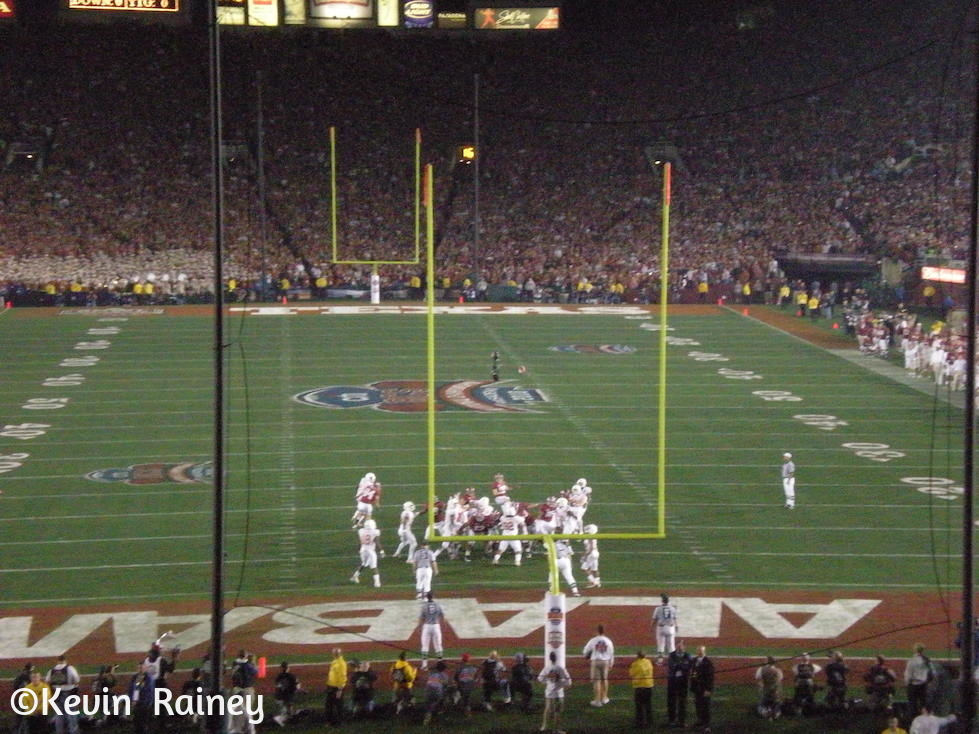 Alabama kicks the extra point after their first touchdown

Alabama started to get its offensive line together as it created holes in the Texas defense. Alabama running back and Heisman Trophy winner Mark Ingram moved almost at will. The tide took a lead it would not relinquish on the first play of the second quarter. Mark Ingram scampered into the end zone for a touchdown behind the block of Mount Cody, a defensive tackle used as a blocker when Alabama was close to the goal line.

Midway through the second quarter, we took control when running back Trent Richardson shot straight down the middle of the field for a 48-yard touchdown run. The extra point made it 14–6. During the last few minutes of the first half, Alabama’s defense dominated. Javier Arenas intercepted Gilbert to end one drive and Alabama kicker Leigh Tiffin added a field goal off the interception. With less than 30 seconds left in half, everyone thought Texas would take a knee. I decided to beat the crowd by going to the concessions outside the stadium. While in line, we heard a tremendous roar. A Bama fan with a headset on said we just scored! After the ensuing kickoff, Dareus intercepted Gilbert’s shuffle pass with 12 seconds left in the half and returned the interception for a touchdown. The point after gave us a 24–6 lead going into halftime. I couldn’t believe I missed the play of the game! Dad had to tell me all about it.

We had to kick off in the second half since we deferred. In the second half, the Texas combination of Gilbert and Shipley, and a Longhorns defense that shut down Alabama in the second half brought Texas within three points of Alabama with six minutes to play in the game. However, Alabama’s Erik Anders sacked Gilbert and Courtney Upshaw recovered the ball on Texas’ three-yard line. After the recovery, Ingram added his second touchdown of the night and extended the lead to 31–21. We intercepted Gilbert twice in the next drives before Trent Richardson added another touchdown near the end. As the time ticked of, Alabama won 37–21. Coach Saban won his second BCS Championship, and became the only coach to do so with two different programs. Alabama also became only the third team to finish a season 14–0. 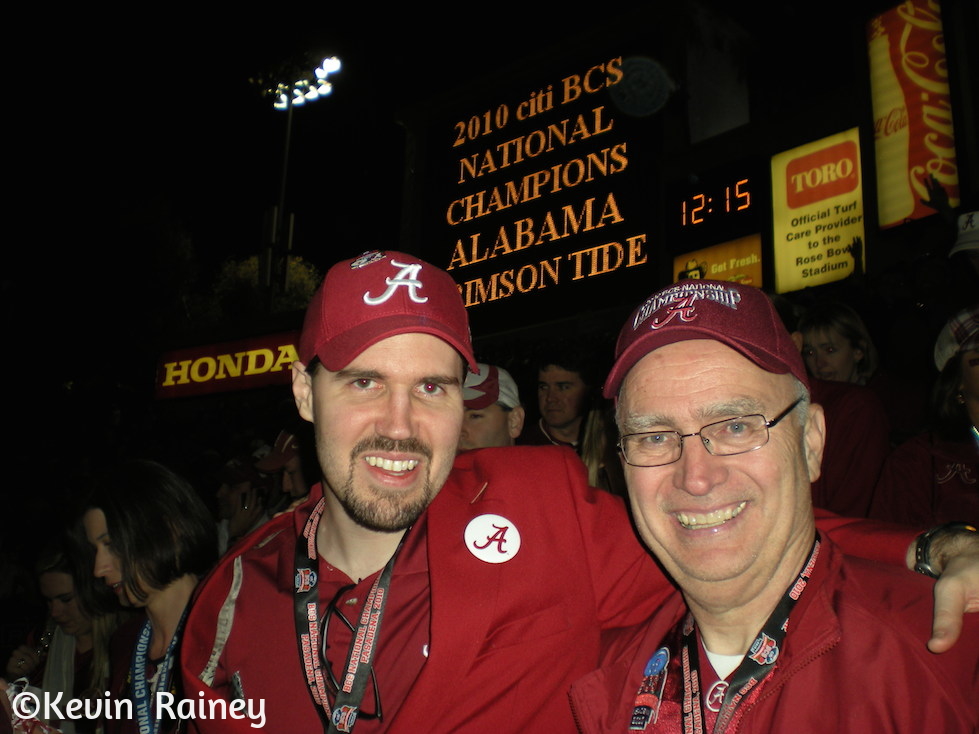 Dad and me after the game. 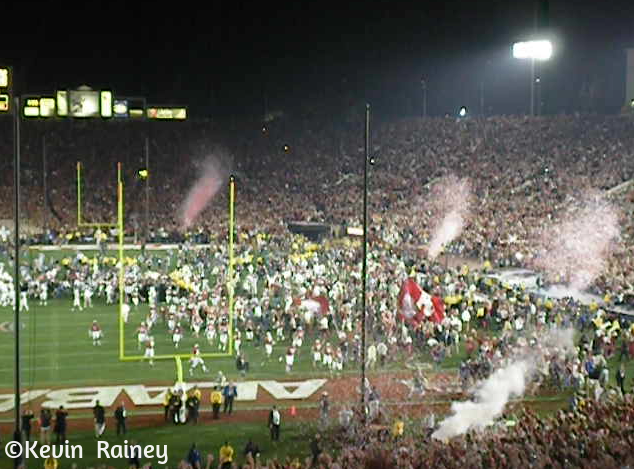 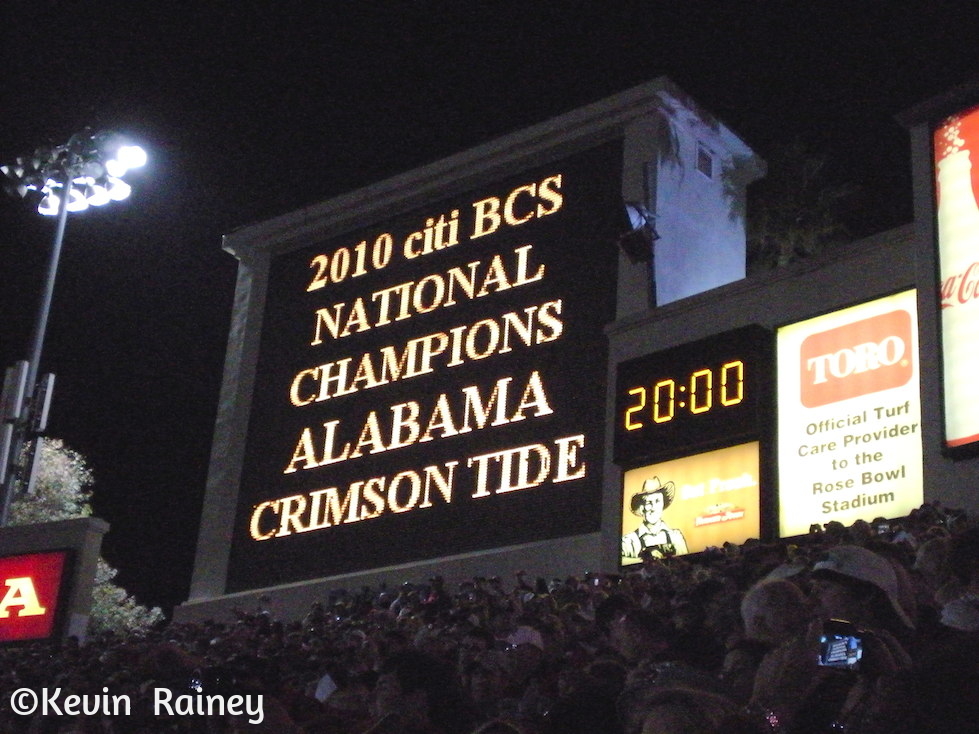 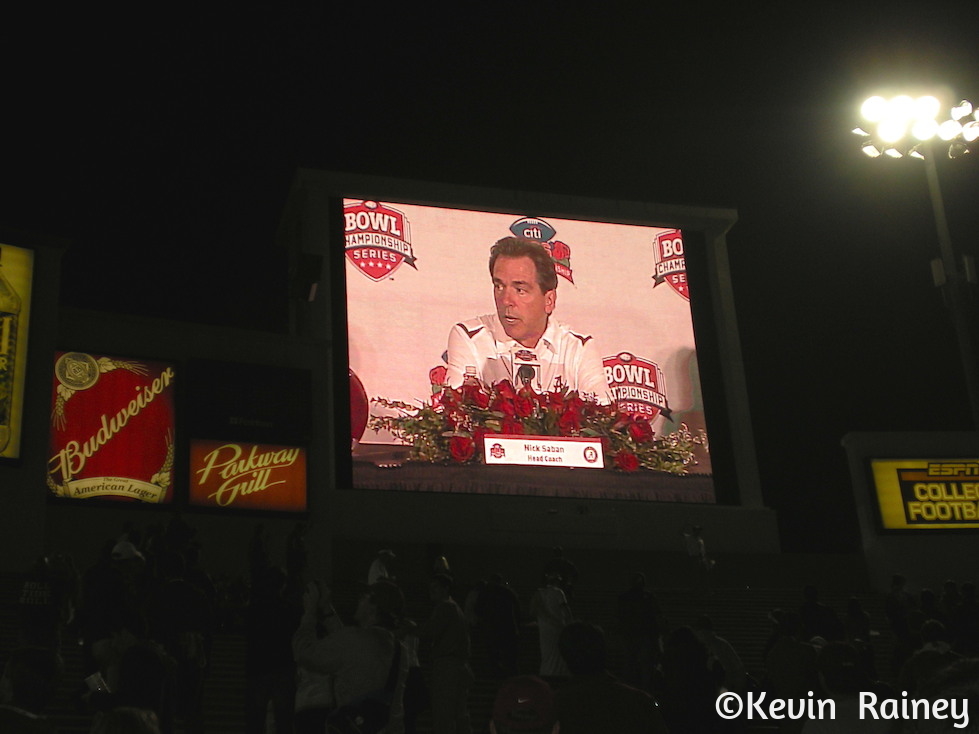 After the game, Dad and I watch the festivities, the trophy presentation and enjoyed the confetti drop. We listened to the post-game interviews before taking some final photos. We then walked back to downtown Pasadena and took a bus to Union station. We found out our bus had stopped running, so we shared a cab with a Texas fan going the same way. By the time we made it back to bus parking lot. Our adrenalin levels were finally slowing down. The long day and post-game euphoria finally caught up with us. We went to check into our hotel and slept well that night!