Down in a Hole, Discovering Part of Poland’s Soul

Think about all of those travels where you venture high above ground level. Chances are, you fly above 30,000 feet to arrive at your destination. When you get there, you often climb a hill or building for a great view. I have lost count of all the spectacular views I’ve seen from above. So it occurred to me that I rarely see a destination from another viewpoint: underground.

Journeying into a deep Polish mine may not sound like a relaxing vacation to many travelers, and I have to admit, I was skeptical too. Afterall, mines are supposed to be dirty, dark and dangerous, so why visit one? It turns out I was wrong.

My great grandfather was a cold miner, and from the stories I have heard about him from family members, he had a very tough and dangerous job. I imagine it could have only been even more challenging for a man who was six foot, seven inches tall. I heard about his experiences working in dark chambers, tight working quarters, heavy lifting, the breathing problems and the risk of explosions. This is why always thought of mining as one of the toughest and hardest jobs that anyone can do for a living. Much of these perceptions are indeed reality. But a visit to a famous Polish salt mine made me appreciate another side of mining: the beauty of it. 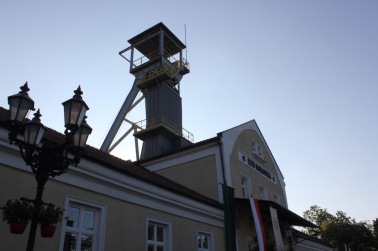 Entrance to the Wieliczka Salt Mine

When I recently visited Kraków, Poland, I highly enjoyed a trip to the nearby Wieliczka Salt Mine (Kopalnia soli Wieliczka). Located in the town of Wieliczka — about 14 kilometers from Kraków, it is referred to as the “Underground Salt Cathedral of Poland.” The ticket price was 64 zlotys, and I was amazed during my journey underground into this UNESCO World Heritage site. The mine was full of rich history, impressive sculptures and entire chambers carved artfully from salt. It is the only site in the world where mining has functioned continuously since the Middle Ages.

The word surreal is overused way too much, but surreal is how I would describe the experience of arriving at the Wieliczka Salt Mine. From the outside, if you ignore the bizarre-looking shaft poking through the the top of the building’s roof, it looks like just another Polish warehouse. However, upon entering in the building, we saw a huge elevator in the middle of the room. We then met our English-speaking guide and received our headsets before we were led behind a huge metal door and then into a dimly lit, but massive wooden stairwell. Then we descended down 378 steps to about 210 feet below. The air became cooler and it seemed like we were descending into the underworld.

Upon arrival at the bottom, I began to realize this wasn’t your typical mine. Although the mine still operates, much of the revenue today comes from tourists. Approximately 1.2 million people visit the Wieliczka Salt Mine each year, and it was easy to see why so many people from around the world come here. We traveled through an eerie labyrinth of chambers carved by hand from salt blocks. Since the 1200s when the first shafts were dug, more than 178 miles of tunnels have been dug through nine levels. Our 1.9-mile-long tour only took us to only about two percent of the mine!

After traveling through a few bare chambers, we made it to a chamber with statues of miners sculpted skillfully from salt. The rock salt looked different than I expected. It appears in various shades of gray and looks a bit like unpolished granite instead of white crystals. We continued on to see several chambers full of interesting salt statues of important historical figures including kings, literary figures, religious leaders, scientists and notable figures connected to Polish history.

In one chamber we saw an impressive statue of the famous poet, Johann Wolfgang von Goethe. In another chamber dating from 1785, we observed a statue of astronomer Nicolaus Copernicus (Mikolaj Kopernik) — who studied at the nearby Collegium Maius of Jagiellonian University — as he held a globe in one raised hand and clutched his book “De Revolutionibus Erbium Celestium” in the other. Another part of the mine from 1743 hosted a bust of King Kazimierza Wielkiego (Casimir the Great). Others chambers held statues of more contemporary figures such as Solidarity Movement leaders and Józef Pilsudski, leader of the Second Polish Republic.

One of the most interesting group of sculptors told the legend of Princess Kinga, who was associated with the Wieliczka mine. She was a Hungarian noblewoman about to be married to Bolesław V, the Prince of Kraków. She asked her father — King Béla — for a lump of salt, as part of her dowry, since salt was very valuable at that time in preserving food. Her father took her to a salt mine in Hungary where she threw her engagement ring in one of the shafts before leaving for Poland. When she arrived in Kraków, she asked the miners to dig a deep pit until they come upon a rock. When the miners found a lump of salt and split it in two, they discovered her ring. Ever since, Princess Kinga has been the patron saint of salt miners in Poland.

Princess Kinga and the salt legend

Another stop was an underground lake in the Erazm Barącz Chamber, located at more than 440 feet below ground. While early mining involved hammers and picks, more modern mining techniques use dissolving techniques, which forms these lakes. It was not the first time that technology changed here. For example, Hungarian-style horse treadmills and Saxon treadmills were added at one point to haul the salt to the surface. Throughout the mine’s history, it has been a royal mine run by the Żupy krakowskie Salt Mines company.

A salt lake in the mine

Perhaps the most fascinating chambers to visit were the ones that contained four chapels carved out of the rock salt by the miners. The absolute highlight had to be the visit to the St. Kinga Chapel (Kaplica Św Kingi), which is essentially an enormous underground church. It was stunning to see that every part of the chapel — from chandeliers to benches to altarpieces — is made of salt! Apparently two brothers spent 30 years creating it in the late 1800s. Believe it or not, weddings and concerts take place here. Some say the chapel has the best acoustics in Europe. 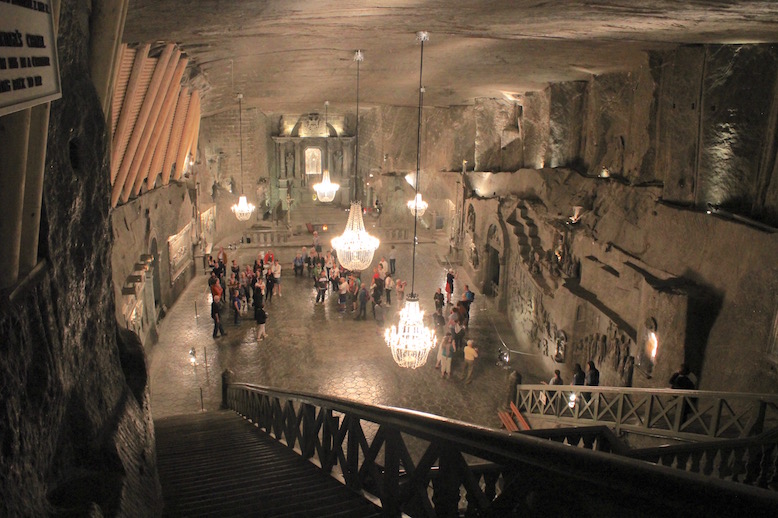 It’s difficult to describe how incredible the St. Kinga Chapel is when you walk in for the first time. The crystals of the chandeliers are made from rock salt that was dissolved and later solidified to achieve a clear, glass-like appearance. Throughout the chamber are stunning sculptures of Jesus plus relief carvings of scenes from His life, such as fleeing the Romans with His mother and father, the Last Supper and carrying His cross through the streets of Jerusalem. Other statues included the Virgin Mary carved from salt crystals, who is beautifully illuminated as she prays. Another impressive statue is of native son Pope John Paul II (Jan Pawel II), who visited the mine on three different occasions during his life. The miners made pilgrimages to him at the Vatican, and were present at his funeral in 2005, his beatification and canonization.

Jesus and scenes from His life

Jesus and the 12 Disciples at the Last Supper 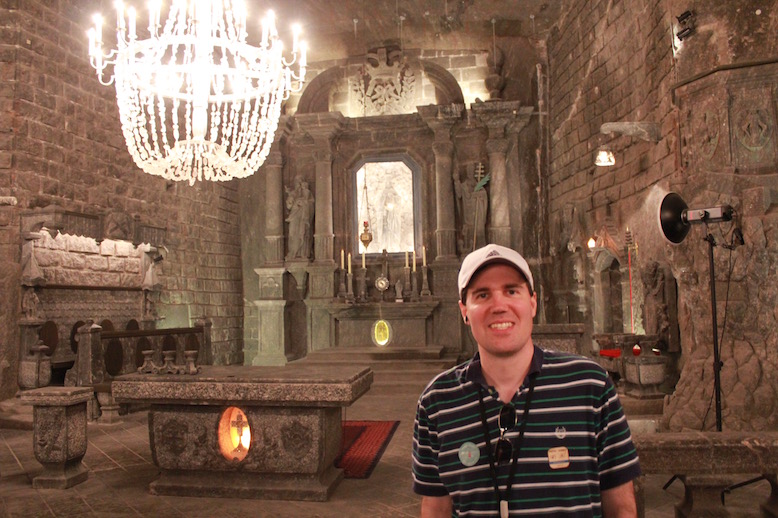 At the end of the tour, we visited the 170-foot-high Stanisław Staszic Chamber. Towering above the gift shop, we saw levels of wood reinforcements straight up above us. We hoped they wouldn’t fail us so late in our tour. Then we took an elevator back up to the surface that held up to 36 of us in nine cars.

It was truly a bizarre but beautiful subterranean journey down in an historic and artistic mine. This trip near Kraków reminded me that beauty sometimes rests just below the surface. It’s a journey that I highly recommend if you are in southern Poland.