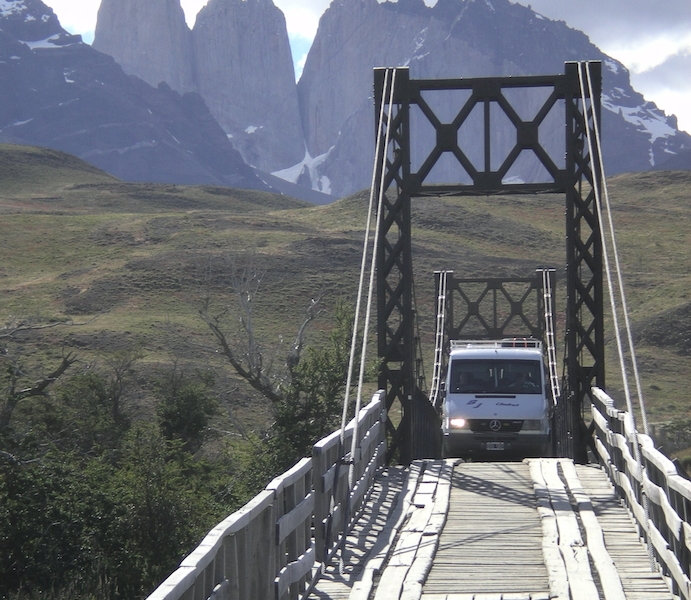 I had just finished hiking the world-famous Circuito W in Chile’s Parque Nacional Torres del Paine. On my walk to the bus stop at Laguna Amarga, I happened to turn around when I heard a vehicle in the distance. I captured this photo of a microbus crossing a ridiculously narrow […]

Saturday – December 29, 2007 – Sadly, today was our last day during our first visit to South America. Chile is such a beautiful country with the warmest and friendliest people. We wanted to make our last day count by seeing as much as possible before our flight […]

Friday – December 28, 2007 – The next morning after breakfast, we said goodbye to Celia as we checked out of the Patagonia Rebelde. Our transfer arrived and drove us and a few passengers already inside to El Calafate’s nearby airport. After checking in and paying our departures […]

Monday – December 24, 2007 – Today was Christmas Eve and we were heading back to Argentina! We waited on our 8:30 a.m. Turismo Zaahj bus at the bus station down the street in Puerto Natales, Chile. We presented our tickets that we bought at the station. Shortly […]

Sunday – December 23, 2007 – On Sunday morning, we awoke fairly early so we could get a nice start to the day. We had hot showers in the refugio – I could get used to this style of “camping” in the future, before enjoying our delicious breakfast […]

Saturday – December 22, 2007 – After waking up, we packed up our things before heading to the refugio for hot showers. Then we went back to the refugio for a breakfast of eggs, ham and bacon. What a great way to start the day in the Chilean […]

Friday – December 21, 2007 – This morning as I woke up and opened the tent door, I was astounded to see Paine Grande towering above us as it peeked through fast moving clouds. This was going to be a great day! After hot showers and a Chilean […]

Thursday – December 20, 2007 – This morning we woke up to catch our microbus to Torres del Paine. Down the street we found the bus office for Buses JB. After some confusion on the bus we needed, we figured it out and booked on the 8 a.m. […]

Wednesday – December 19, 2007 – This morning we had breakfast before going out for a morning tour of the surrounding mountains. We took a taxi up to the ski resort of Centro de Montana Glaciar Martial. We took the aerosilla, the chairlifts, up to the top of […]